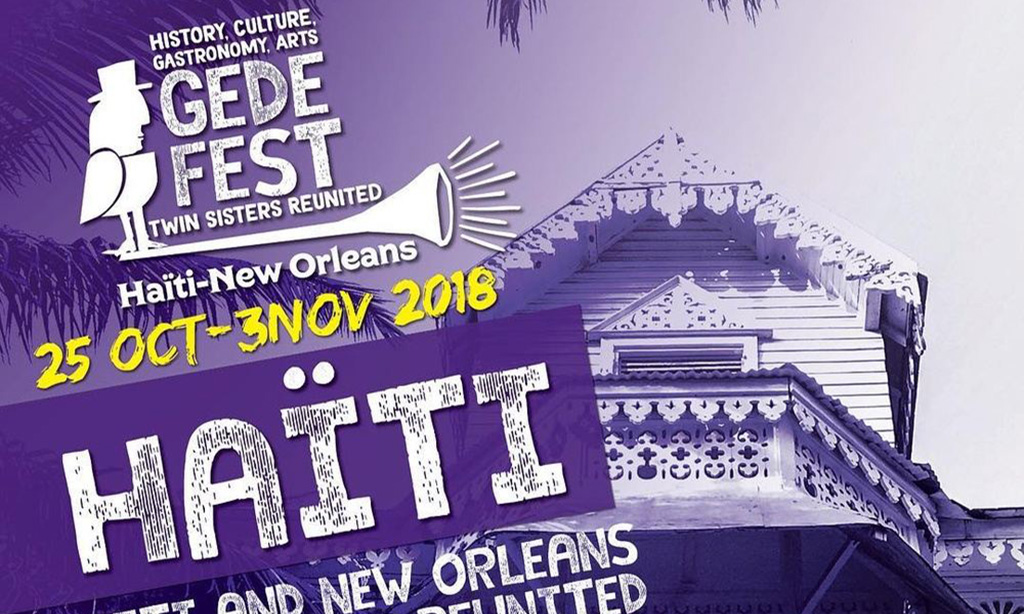 The first edition of the multidisciplinary Gede Fest (from October 25 to November 3, 2018) started yesterday in Haiti and takes place in Port-au-Prince and Jacmel. The festival mixes history, music, gastronomy and the arts, and explores all facets of Creole culture.

We can read on HaitiLibre the Festival’s vocation is to strengthen ties between Haiti and New Orleans, Louisiana (NOLA), two former French colonies linked by history and Creole culture. For the occasion, delegations from the United States will travel to Haiti and represent the colors of New Orleans during the Festival.

Chef  Donald Link of The Link Restaurant Group of New Orleans together with Haitian Chef Stephan will offer their culinary skills to gourmets participants. Link said in this article:

After the revolution in Haiti (1791-1804), New Orleans received about 4,000 exiles which doubled the population of New Orleans at the time bringing with them their culture of food, music and Vodou. I have always been interested in the African-Caribbean influences that have shaped New Orleans and Creole food and culture

Jean Michel Lapin, the Minister of Culture said at the launch of Gede Fest:

The Ministry of Culture is pleased to contribute to the realization of the first edition of Gede Fest, an event that promotes the Haitian Cultural Heritage. The institution is committed to the initiators of this Festival combining the best attractions of the rich cultural repertoire of the country in a dynamic of interaction between two social entities (Haiti and New Orleans) united by strong historical and cultural ties

Around the world, festivals and cultural events are important tourist attractions and generate positive economic spin-offs. All the more, Gede Fest, in the hope of restoring relations between Haiti and New Orleans, will give new impetus to cultural tourism, to create wealth […] It is therefore with great enthusiasm that the Ministry of Tourism supports this festival, which hopefully will remain an essential meeting in the agenda of Haitians and Orleans

Many activities will take place during the Festival : Reyinyon Marasa Cocktail Mixer and free demonstration/tasting offered by Chef Donald Link and other Haitian chefs; photographies by FotoKonbit with Haitianola; an exhibition of works of art by the famous Haitian sculptor André Eugène; Sine timoun (screenings of Disney movies ‘Coco’ and ‘The Princess and the Frog’); Men Gouyad! Party with Rara (Haiti) and Second Line (NOLA); dance master class led by Isabelle Morse…

Don’t miss this huge event in Haiti and follow @GedeFest to know everything about it!

First edition of the International Anti-Corruption Film Festival in Tunis