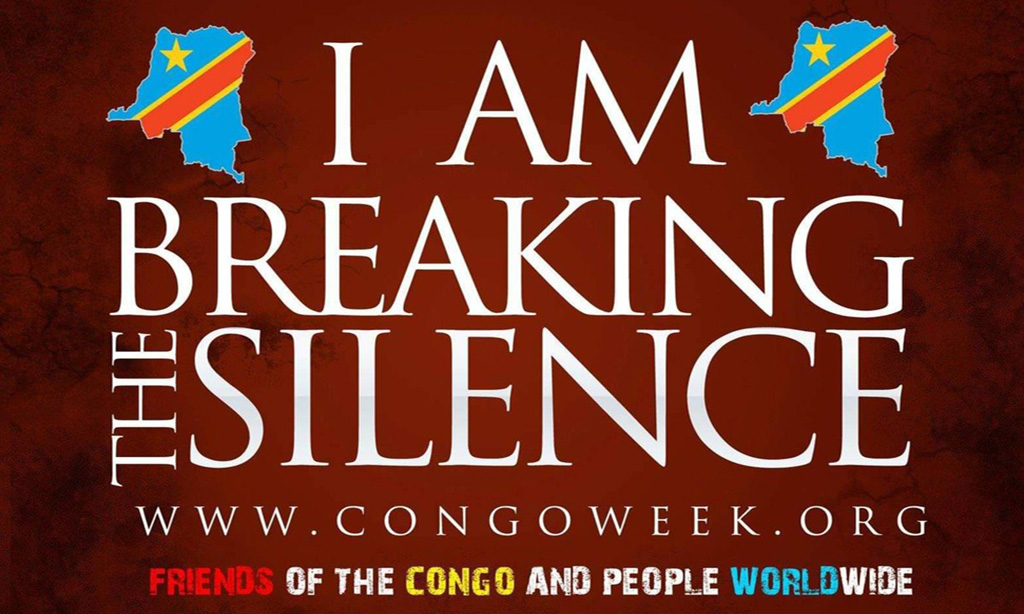 Since 2008, we have participated in Breaking The Silence: Congo Week, and many of you joined us in 2013 when we organized events and discussions during this special week. The purpose of Congo Week is to raise global consciousness about the situation in the Congo and advocate for peace, justice and human dignity in partnership with the Congolese people.

For 10 years, Congo Week has galvanized the participation of people in over 70 countries and 500 university campuses and communities. We can read on Breaking The Silence: Congo Week website:

Breaking the Silence Congo Week is a week of activities that commemorates the millions of lives lost in the Congo conflict while celebrating the enormous human and natural potential that exists in the country. Communities throughout the globe join in partnership with Congolese each year on the third week of October to screen films, hold teach-ins and forums, organize rallies, host fundraisers, put on concerts and undertake many other activities to elevate the profile of the Congo throughout the globe. Students and community organizers initiated Congo Week in 2008. Religious leaders, scholars, intellectuals, artists, and ordinary people throughout the globe also got involved to acknowledge the lives of the Congolese people and their pursuit for human dignity.

Congo Week started yesterday and it’s an opportunity to raise awareness about the devastating legacy of conflict in the Congo. Many events are organized around the world, we invite you to visit Friends of the Congo website to check their activities; Future International is organizing an event on October, 27 in London. Congo in Harlem has also launched for its 10th anniversary with film screenings, panel discussions, and performances:

You can follow #CongoWeek on Twitter to learn more about events and meetings taking place near you.

It’s important to mobilize support on behalf of the people of the Congo, and this week gives the occasion to shed light on the country and to learn more about it and its people. You can find more information and news on our dedicated page En Route To Congo, and check a list of Twitter accounts to follow.

We also selected video to watch, Crisis In The Congo: Uncovering The Truth which is featured on En Route To Congo with other video.

The Heart of Nuba Film Screening on October 20, 2018 in Washington DC