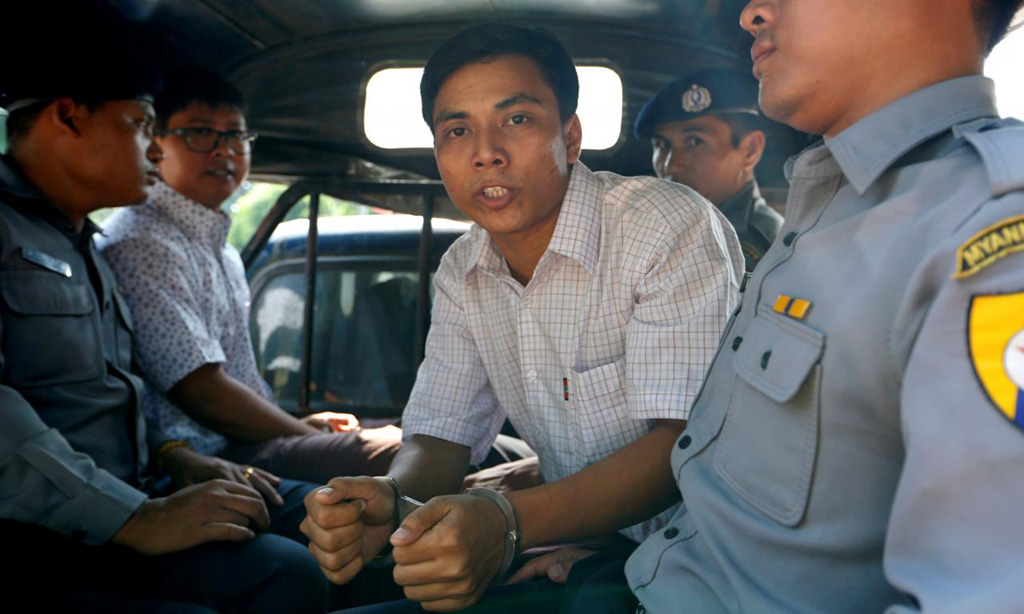 Detained Reuters journalist Kyaw Soe Oo and Wa Lone are transported in a police vehicle after a court hearing in Yangon, Myanmar April 20, 2018.


Two Reuters journalists, Wa Lone and Kyaw Soe Oo, have been detained in Myanmar since Dec. 12, 2017, and Reporters Without Borders (RSF) calls on the international community to step up the pressure on Myanmar.

The two journalists are paying for the professionalism of their investigative reporting on a massacre of Rohingya civilians by soldiers last September in the village of Inn Dinn, during operations in northwestern Rakhine state that the UN has described as “ethnic cleansing” and as containing “elements of genocide.”

The UN, United States and European Union have all repeatedly called for the release of the two journalists. Bill Richardson, a veteran US diplomat who resigned in February from an international panel advising Suu Kyi’s government, said she became “furious” when he suggested freeing the two journalists. Since last September, RSF has been pressing Suu Kyi about the press freedom violations in Myanmar resulting from the crisis that began in Rakhine state in August and prompted the flight of nearly 700,000 members of Myanmar’s Rohingya Muslim community to neighbouring Bangladesh.

Myanmar activists urge president to release jailed journalists, according to an article published by Reuters. Myanmar civil groups signed an open letter to the country’s president on Thursday, urging him to immediately release two Reuters reporters accused of possessing secret government papers and police officers involved in what it called an “obviously an unreasonable case”.

The letter, signed by 163 civil society groups, also asked newly-elected Myanmar President Win Myint to “seek justice and truth” and to set up an investigation committee to “reveal justice as soon as possible in order to maintain people’s trust in the judiciary sector.” Myanmar government spokesman Zaw Htay did not respond to requests for comment. He has declined to comment on the case after previous court hearings, saying the country’s courts are independent. A court in Yangon has been holding preliminary hearings since January to decide whether Reuters reporters Wa Lone, 32, and Kyaw Soe Oo, 28, will be charged under the colonial-era Official Secrets Act, which carries a maximum penalty of 14 years in prison.

Read more on this page.