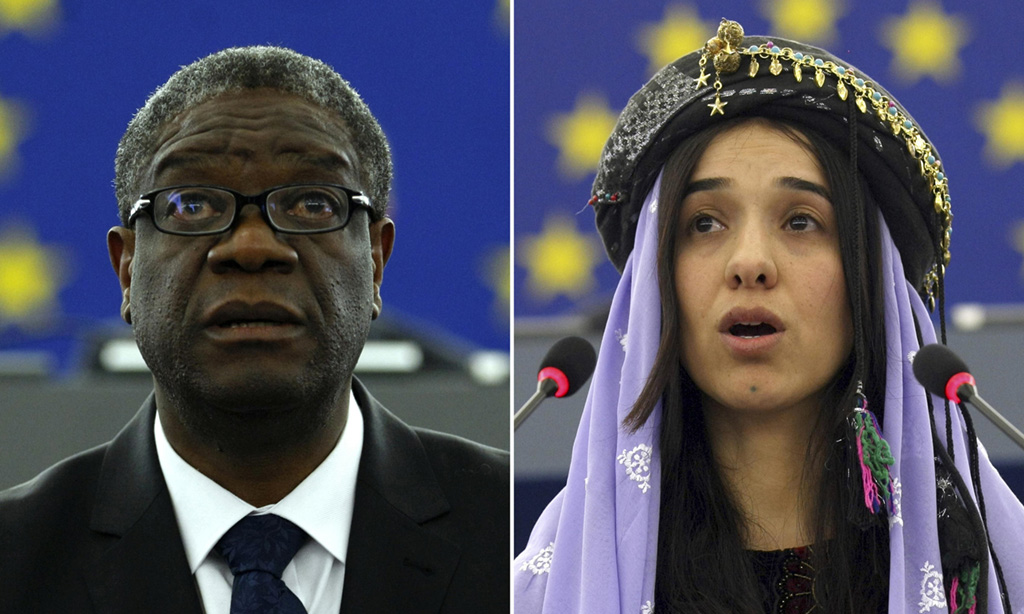 Dr. Denis Mukwege, from the Democratic Republic of Congo, left, in 2014 and Yazidi woman from Iraq, Nadia Murad in 2016 as they both address the European parliament in Strasbourg, France. The pair won the 2018 Nobel Peace Prize for their work to highlight and eliminate the use of sexual violence as a weapon of war


On Friday, Nadia Murad and Congolese Dr Denis Mukwege were jointly awarded the Nobel Peace Prize 2018 for their “efforts to end the use of sexual violence as a weapon of war“.

We often mention the incredible work of Denis Mukwege at Panzi Hospital in Bukavu, he has been working for years with victims of sexual violence in DR Congo (learn more via our En Route To Congo page). Nadia Murad, a prominent activist for Yazidi women, was herself one of the Yazidi women who were victims of rape and abuses by ISIS.

2018 Nobel Peace Prize laureate Denis Mukwege is the helper who has devoted his life to defending victims of war-time sexual violence. Fellow laureate Nadia Murad is the witness who tells of the abuses perpetrated against herself and others. #NobelPrize pic.twitter.com/MY6IdYWN1e

From the press release by The Norwegian Nobel Committee:

This year’s Nobel Peace Prize is firmly embedded in the criteria spelled out in Alfred Nobel’s will. Denis Mukwege and Nadia Murad have both put their personal security at risk by courageously combating war crimes and seeking justice for the victims. They have thereby promoted the fraternity of nations through the application of principles of international law.

Berit Reiss-Andersen, Chair of the Norwegian Nobel Committee said: ‘If we want people to say ‘no more war’, we have to show how brutal it is‘. You can watch the announcement of the Nobel Peace Prize 2018 below:

An important recognition for @NadiaMuradBasee and @DenisMukwege. They were jointly awarded the #NobelPeacePrize for 'their efforts to end the use of sexual violence as a weapon of war'. May the world hear them and support their work even more now! #Women #Rape #Congo #DRC #Yazidi pic.twitter.com/THo5QGyyos

Women for Women UK also tweeted about the prize and is rightfully calling out about why the situation of women has been ignored for so long:

Why it took the world so long to call rape used as a weapon of war by its name: A war crime?https://t.co/3XepA4rgW9

The Council on Foreign Relations (CFR) congratulated Dr Mukwege, and they tweeted a link to their interactive guide tracing the 20 years of conflict in the DRC and the toll it has taken on civilians:

For nearly two decades, the eastern provinces of the Democratic Republic of the Congo (DRC) have been the epicenter of the deadliest conflict since World War II. Part of a vast country straddling the heart of central Africa, the eastern Congo continues to defy efforts at pacification. As the conflict has morphed from a regional war to a series of tenacious local insurgencies, the civilians caught in the middle have paid the steepest price.

You can read this article on this page.

The Panzi Foundation sent a tweet saying this prize ‘is just the beginning’ and invites you to keep supporting Dr Denis Mukwege:

This is just the beginning. Join us in the fight against sexual violence in conflict – please share, and sign up for our newsletter to stay-up-to-date on next steps and how you can help advance Dr. Mukwege's efforts to end rape in war. https://t.co/IME1nBSZcI pic.twitter.com/XeVUyeAt5r

A lot still remains to be done to empower women. Please support Dr Denis Mukwege and Nadia Murad in their fight to free women from oppression and sexual abuse around the world! You can follow them on Twitter @DenisMukwege and @NadiaMuradBasee.

The City of Joy Documentary is now available on Netflix