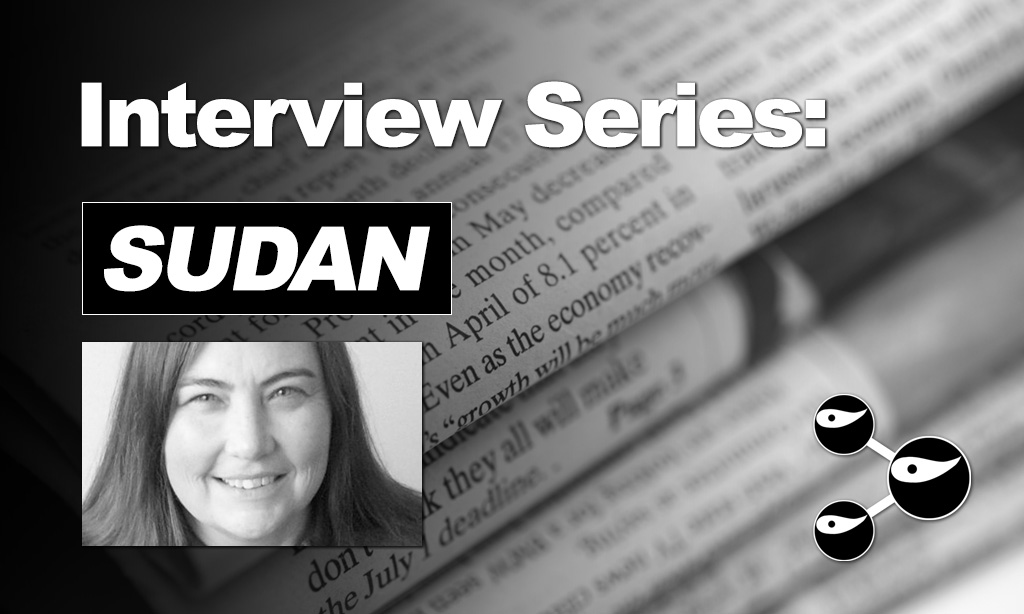 The MagkaSama Project Interview Series: Sudan is an ongoing collection of interviews with experts, organizations and journalists. Our first interview featured independent researcher specialized in Sudan, South Sudan and Chad Jerome Tubiana. You can read his interview (in French) on this page. Last week we published the interview with Radio Dabanga, the independent radio station is reaching over 2 000 000 listeners a day in Darfur and Sudan. They gave powerful answers and a great insight on their hard work, read their full interview here.

This time we wanted to learn more about Sudanese (and South Sudanese) living in the United States, so we asked Sudan Unlimited founder Esther Sprague about her work.

MagkaSama: You are the founder of Sudan Unlimited, can you please tell us what is your professional background and why you started the organization?

Esther Sprague: I started Sudan Unlimited in 2006 for the purpose of supporting Sudanese and southern Sudanese who were working to end violence and build peace in Sudan. I tend to work behind the scenes to provide administrative and organizational support for various projects, events and advocacy campaigns. I have a degree in business and am finishing up a master’s degree in international studies. I have managed a restaurant equipment company, provided administrative support for an organization providing transitional housing and employment opportunities for homeless men, managed a law firm, served as the administrator for my church, and currently, I coordinate the international summer externship and semester exchange programs for a law school.

You know many Sudanese coming from war-torn regions like Darfur and South Kordofan in Sudan, but also from South Sudan. Could you tell us some of their stories to better understand what was their life and why they left their country?

I was introduced to Sudan in 2003 by Mamer Kuer Ajak, one of the Lost Boys of Sudan.  Mamer and other Lost Boys and Girls were forced out of their country due to attacks by the Sudan regime. These children walked across southern Sudan to Ethiopia, where they were later forced out by a new government. Those who survived eventually settled in Kenya in the Kakuma refugee camp. Some were later invited to the United States. Mamer attended Point Loma Nazarene University in San Diego, California. I heard him speak at an annual meeting for our church denomination and our pastor invited him to spend the summer with our community. Besides finding his family, one of Mamer’s primary concerns was the unfolding genocide in Darfur, because it mirrored what he had experienced as a child, and so together we became activists.

The Sudan regime seeks to change the demographics of Sudan and to steal the resources of the country by either killing or violently displacing Sudanese. In addition, it detains and tortures anyone who dares to oppose the regime, and it tightly controls access to the country, leaving millions without food, medicine and basic necessities.

Europe is confronted with what is referred to as a ‘migrant crisis’. To stop the waves of African refugees, the EU has allocated over $200 million to help Sudan stem migration since 2015. On their side, the United States has lifted key Sudan sanctions and is now collaborating with the Sudanese regime to counter terrorism. What do Sudanese people living in the United States tell you about these deals, and in regard to how the United States is currently dealing with migrants on its territory? How do they feel about the global situation?

It is hard for the Sudanese that I talk with to understand these polices of Europe and the U.S. In the past, both have been strong allies of the people of Sudan in their efforts to secure freedom, equal citizenship and a just peace. It does not make sense to Sudanese for the E.U. to provide resources that benefit the regime or for the U.S. to open up opportunities for the regime. Not only does the Sudan regime openly violates the values of the E.U. and U.S., but its support and engagement with terrorist organizations and its destabilizing influence in the region, such as in South Sudan and the Central African Republic, present security risks for the E.U. and U.S.

In a recent tweet by Eric Reeves, the Sudan researcher and analyst wrote: ‘The Sudanese economy continues to implode without significant int’l news coverage. But the vast crisis, affecting all of #Sudan, is causing increasing suffering and political unrest. Only a change in regime by the people of Sudan can lead to a reversal of economic fortunes’. On your website, we can read it ‘is only a matter of time before they [the people of Sudan and South Sudan] reclaim and rebuild their great countries’. Do you see any sign of change from Sudan/South Sudan or from the diaspora? How can they make this change happen?

Change takes time, especially when the playing field is so uneven; but the people of Sudan are resilient and they have a long history of civic and political engagement. In Sudan, we are seeing opposition groups sitting together to forge a common agenda, we are seeing youth taking great risks to question the status quo, and we are seeing Sudanese intellectuals in Sudan and in the Diaspora propose alternatives, such as the work provided at www.eagsudan.org.

In June, the Never Again Coalition sent an open letter to the UN Security Council regarding the proposed reduction to the UNAMID mandate in Darfur, urging the ‘Security Council members to “recognize the vital importance of UNAMID’s presence in Darfur and consider the catastrophic impacts that further reductions in peacekeeping forces would have on civilian protection and peacebuilding’. Can you tell us what is the role of UNAMID in Darfur and why is it so important not to scale down the mission? Can UNAMID alone bring peace in Darfur?

UNAMID is a witness to atrocities committed and sponsored by the Sudan regime in Darfur, and to a certain degree, UNAMID serves as deterrence. UNAMID cannot bring peace to Darfur, but without UNAMID, the regime will commit its crimes completely unchecked. These crimes include burning down villages, beating, raping and killing men, women and children, blocking humanitarian aid from reaching those in need, and stealing land and handing it over to foreigners among other crimes.

As Eric Reeves pointed out in his tweet, there is almost no international news coverage about what is happening in Sudan. If some media reported on Sudanese officials invited to Belgium (and to France) to review the cases of Sudanese refugees before they were deported and tortured upon their return, the news didn’t make headlines. Very few media reported Sudan’s President Omar Al Bashir, wanted by the International Criminal Court for genocide and war crimes, was invited by Vladimir Putin to attend the recent World Cup final. Why is media coverage on Sudan so scarce and why are these events of little (or no) consequence on U.S. / EU policy in Sudan?

The events in Belgium and France did get some attention by media because civil society organizations and some citizens mobilized and expressed their outrage at these blatant violations of international law. In the U.S., the media is mesmerized by the actions of the current U.S. administration and so little else is covered. In the Sudan regime, the E.U. has found a partner to curb immigration and the U.S. has found a source of intelligence on the war on terror. The U.S. and E.U. are willing to look the other way with regard to the crimes of the Sudan regime in order to achieve their own interests. This short-sighted approach that tolerates genocide and promotes impunity ultimately puts everyone at risk.

The media but also the public opinion don’t seem too concerned by what is happening in Sudan and South Sudan. Even though the global petition to overturn Noura Hussein’s sentence to death has received a million signatures and gained the endorsement of celebrities, the attention on Sudan has already faded away. Nevertheless, protests against the Sudan regime are still organized, like the one by the Sudanese Diaspora in the UK, Waging Peace and HART carried out in various cities around the world last June. We know from experience how hard it is to mobilize support for a cause and as Sudan Unlimited seeks to amplify Sudanese and South Sudanese voices, do you think they’re heard enough?

People are inundated with information and the crisis in Sudan is one of many serious crisis in the world. While it is harder to be heard, Sudanese, South Sudanese and their friends have a grave responsibility to keep advocating for justice and change.

We offer an opinion to the interviewee. Feel free to share with our readers something that you consider important to mention, to explain or to point out.

It is in the best interest of international peace and security for the E.U. and U.S. to hold the Sudan regime accountable for its crimes, including its support of terrorism, and to invest the resources necessary to address the root causes of violence, displacement and poverty in Sudan. The current approach of engagement with the Sudan regime is just the latest example of the regime outsmarting the international community. The Sudan regime will say and do whatever is necessary to stay in power and to maintain control of Sudan’s resources. The test of whether the Sudan regime is a legitimate partner is whether or not we see significant improvements in the day to day lives of all Sudanese. 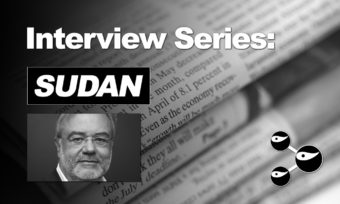 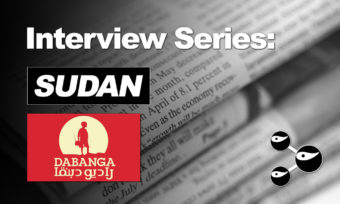 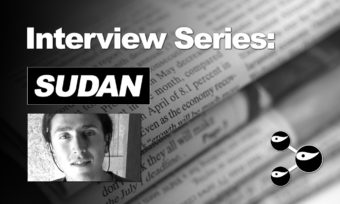