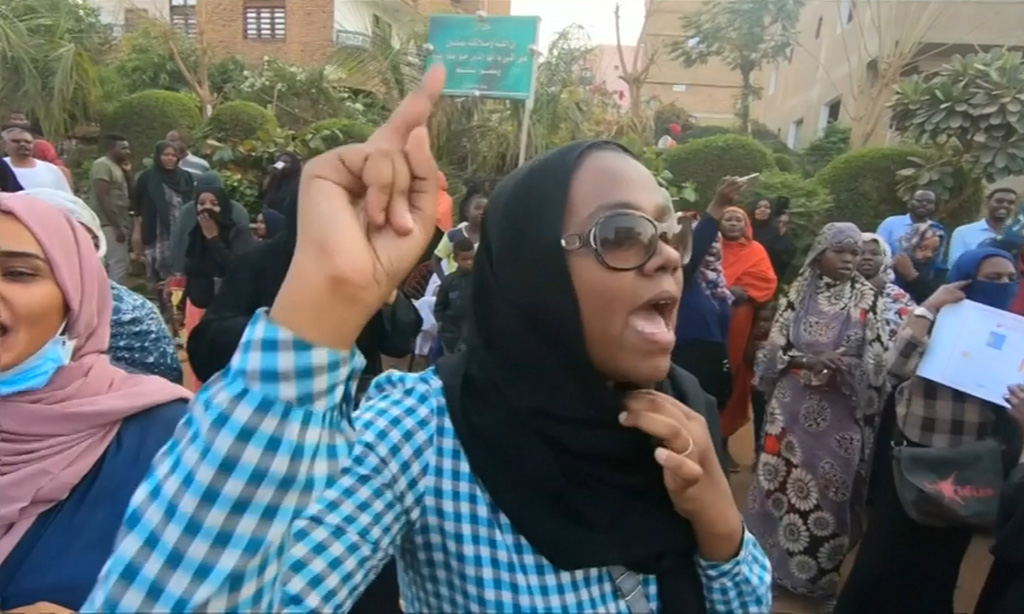 
If you read the news round-up from our latest Newsletter, the situation in Sudan is getting tense as the people are peacefully rallying across the country for several months now, but it may not last. We are used to see men in the crowd but women are also taking their part in the protests.

In their article ‘‘Tasqut bas!’ – Sudanese women on frontlines of protests despite prosecution’ Radio Dabanga describes how women remain steadfast on the front lines of protests:

During the past four months of public uprising, the Sudanese security service and riot police have been quick to disperse and arrest men and women participating in the demonstrations – often shooting, beating or using tear gas against civilians […] The security forces and militiamen in civilian uniform have been granted more powers by one of these emergency orders and use this against women who participate in the demonstrations. According to people speaking to Radio Dabanga, women have been detained and harassed, threatened or beaten, under the provisions of the State of Emergency in Sudan. Dozens of women have been sentenced to flogging as a result of prosecution […] In recent years the No to Women’s Oppression Initiative denounced practices and laws that are unfriendly against women, such as the Public Order Act that punishes women for wearing ‘inappropriate clothing’.

On March 12, Omdurman Women’s Prison in Sudan released a large number of young women who were held during demonstrations over the past weeks. That day the Court of Appeal in Khartoum overturned the verdicts of El Imtidad Emergency Court against nine young women. They were sentenced to one-month imprisonment and 20 lashes after being detained while demonstrating in Khartoum’s Burri district. In a gesture to mark International Women’s Day on March 8, Al Bashir told the head of the National Intelligence and Security Service (NISS), which has been central to the suppression of protests, to release all women who have been detained in connection with the protests.

Sexism amid Sudan protests is a reality women also have to deal with. In the BBC series of letters from African journalists, Zeinab Mohammed Salih considers why female protesters are angry with their male counterparts:

The anti-government protests in Sudan are unwavering despite a state of emergency imposed in February. This is largely thanks to the efforts of the Sudanese Professionals Association (SPA), which has been organising the demonstrations against President Omar al-Bashir’s nearly 30-year rule […] The SPA got itself into hot water when it suggested that instead of a day of scheduled protests on Saturday 9 March, people come out instead to clean the streets […] The street-cleaning faux pas began as anger about the sexist attitudes of male protesters and has mushroomed into anger about how women are treated in Sudanese society. […]

Women from all backgrounds and ages have been protesting – some on the frontline, others standing in front of their houses sheltering those who flee live ammunition or tear gas. They have also been serving protesters with food and drinks […] According to the No To Women Oppression group, between 40,000 and 50,000 women are arrested and flogged each year by the police for flouting the country’s Public Order Act introduced by Mr Bashir’s government. The law regulates what women can wear – they can, for example, be flogged for wearing clothes such as trousers that are considered indecent or simply for being out with men who are not their relatives.

Interestingly, earlier this month a court overturned flogging sentences for nine women accused of taking part in protests. And the clean-up day in Khartoum did take place – with both men and women taking part. These could perhaps be seen as signs of changing times for women in Sudan.

Last February, Channel4News foreign news reporter Yousra Elbagir reported on the women on the frontline of the protests in Sudan. In the video they describe their experience at the hands of government forces (some images may be distressing):

Sudanese women are strong and resilient, they make their voice heard and express themselves as freely as they can. Sudanese-born graffiti artist Assil Diab is now living in Qatar but recently came back to Sudan. She uses her art to honor demonstrators killed in the protests.

Max Dana, founder of the MagkaSama Project, was a graffiti artist in her youth and she forwarded us the link to Assil Diab’s Facebook page to share with you the work of this committed artist from Sudan. Watch VOA Africa video to learn more about Diab and follow her on Twitter @sudalove_ !